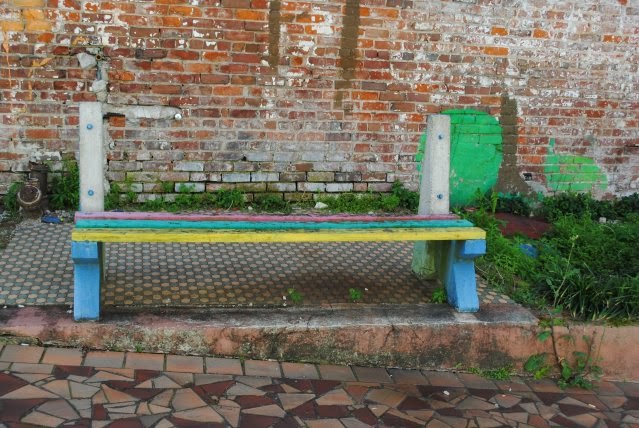 The year I turned 14, a Black Hawk helicopter crashed into the Long Island Sound, no more than a bike ride from our house. A dark horse named Sideways Glance ran past all the favorites to win the Triple Crown. The unexpected was happening all around us. That was the year when Mother said our luck ran out.

In August, Auntie Gin showed a photo of a giant uncircumcised penis to a client at the Lady Grecian beauty salon and was shunned and fired from her job at Holiness Pentecostal Church. Then Howler, my younger brother (his real name is Howard, but we’ve called him Howler since he cut his baby teeth) suddenly took sick. He projectile-vomited all over the patrons in the waiting room of the Humane Society animal shelter and had to be rushed home before he got to choose his puppy.

In September, Father walked down the stairs to the Far Rockaway subway station while reading the financial Times and kept on walking straight onto the tracks. He was pulled back to safety before the train arrived, but the experience of having almost contacted the third rail exhilarated him unexpectedly.

He gibbered that day and for days after. When he regained his speech he repeated “I could have died. I could have DIED” to everyone he met. “What luck, eh? Everything happens for a reason, though. I must have been saved for some purpose.”

Mother believed that luck ran in families, like a gene for weak ankles or an overbite. It was something that could attach itself to a clan, lamprey-like, holding fast --- until it didn’t. On the one hand, she explained, luck could stick around for generations.

“Look at the Rockefellers,” she said.

Or, it could arrive and stay for only one day before fleeing. BUT, on that day you could win the lottery.

“You only need one day of really good luck to straighten out a whole family,” she reminded us.

After Auntie Gin revealed to the whole world that she had dementia and Howler shamed us at the animal shelter and Father walked into thin air, I began to question the solidity of my family life.

At age 14, I had come under the influence of rationalists like Carl Sagan and the difficult Noam Chomsky. I won’t pretend to you that I understood everything they wrote by any means, not by half. And Chomsky, not by a tenth. Yet I grasped the basic and important concept that we are not beset by a fickle, purposeful force called luck.

I believed that they were telling me, there is no “thing” that we have and lose, no external force that brings us joy one moment and sorrow the next with the draw of a card because luck – the entity my mother wanted so earnestly yet feared -- doesn’t exist. It was my view, because it seemed the rational view, that the universe and all events we can’t control are random. To my 14-year-old mind, we could not be unlucky or lucky any more than we could be Caesar’s ghost or in two places at one time.

MOTHER: Look at this story in the Herald. This family, the Borowitzes, all of them killed when a bus hit their car.

ME: The bus also hit a cement wall killing the driver and 14 passengers so it was not fate or luck singling out the Borowitzes. It was physics: the bus had bald tires, the asphalt was fresh and the road was wet.

FATHER: EXACTLY! It was the Borowitzes’ bad luck to be on that road at that exact moment when the bus swerved, not three seconds later!”

Frequently, Mother would be ready with the Powerball lottery report when I came home from school, a newspaper clipping laid out on the kitchen table beside some fruit and cookies.

“One hundred million dollars to a single woman!!” she keened triumphantly.

“Your point?” I said, separating an Oreo.

“Are you going to tell me that woman isn’t lucky?”

I examined the photo of a beaming Dorothy (Dot) Kilby, K-Mart cashier from Steubenville, Ohio, and her giant check. Apparently Miss Kilby had felt a sudden impulse to buy her first-ever ticket just 90 minutes before the drawing.

“Unh-hunh, Miss Atheist,” my mother said. “How do you explain that?”

“How I explain that, Mother, is it’s a lottery. Sooner or later someone will win. That is the nature of lotteries. Random numbers pop up in a tube. If enough people buy tickets, sooner or later six numbers will match the ones in the tube.”

In December, Auntie Gin drank some peach schnapps, fell in her bathtub and died. Mother and Father were called downtown to a lawyer’s office and came home happier than we had ever seen them. Christmas that year was an absolute blast. For the first time ever, we had real live tree, a Scotch Pine. Heaped under it were wrapped and beribboned boxes – multiple presents for everyone!

My father seemed to be lighted from the inside – not by a warm glow, but by a tractor beam shooting from his eyes. He talked fast and constantly with a forcefulness like the words had been backed up for years and only now allowed to spill out. Howler noticed it, too, and hid his presents out of fear that Father would snatch them back. I helped him shove an air hockey set behind a chest of drawers.

“Do you think it was the fall on the train tracks?” he asked.

Howler went quiet. He looked too sad for Christmas. He said, “Remember that other time when Father was so excited and talked really fast, and we said it was scary, almost like he was dad but not really dad?”

I was surprised that Howler had noticed. He had been a little kid in a goofy Shrek t-shirt at the time. If we ever spoke about Father’s “bad” time, we spoke in secret.

Father barely slept from Xmas to New Year’s. He talked about everything and nothing, but mostly about his plans for an empire of video arcades. He told Mother she was in for a glorious new tomorrow. He rubbed his hands together when he spoke, like a man trying to start a fire by friction.

On the second of January, when the bank opened, Father took two thirds of Auntie Gin’s life insurance money and bought a video arcade in a shopping center that had seen better days.

“We got lucky to find a store at such a good price,” he said, oblivious to the fact that, one by one, the stores around him were shutting down and moving elsewhere. Nor did he know enough about video machines to know that most of the games in the arcade were outdated or broken.

Still, he plunged himself into the investment and the idea of earning enough from his first – his “seed” – store to build his empire. He loved the arcade’s flashing lights, the sounds of gunfire and bells, pinging and humming.

Father took Howler there one night to treat him to free games. Poor Howler wandered from game to game, overwhelmed by the hurdy-gurdy of the machinery and certain that Father had no clue how to run the store.

“Father can’t tell one game from another,” he said. “I heard this guy ask him if we have Star Vendetta 2, and Father didn’t know.” My smart, perceptive little brother began to worry about our father. He surfed the internet and read a business story about video arcades, so popular in the 1980s, now being dinosaurs.

“People don’t go places to play games,” he told me, his small forehead creased by adult worries. “They don’t have to. Everyone has X-Box or tablets. Father was gypped! It’s not FAIRRRR!” And with that he began to howl, his high, patented banshee curdling sound ripped from a winter wind.

I hugged Howler tightly, letting the noise die down, letting his thin shaking shoulders subside. “Don’t worry,” I murmured, only the hundred thousandth older sister to say it.

Eventually, all the stores in the Eastmont Shopping Center closed and Father’s with them. He found a collector who bought three of his 50 machines, and the rest he sold for scrap metal.

Mother did the math. In his mania to become a video emperor, Father had cost us the equivalent of a college education for Howler who, she believed, was destined for greatness.

Father plunged into a black mood, the same as he had done on previous occasions when a business scheme went south. He stayed under the bedcovers for weeks. We ate dinners without him. Father’s green days – the ones where the world seems new and all things are possible – were over, at least for a while.

Mother was quieter than usual. She stopped trying to bait me with newspaper stories. She left the laundry wet in the machine until it turned rank. I don’t know if Mother saw how his cycles had crept into her consciousness and how her highs and lows were driven by his.

Looking back, I wish that Mother could have seen that luck is the bipolar’s religion, both being based on up and down cycles. Plot them; both are sine waves.

We would have that conversation later. Now was the time for normal things – for pork chops and shoveling the driveway and Tuesday night Bingo at Sacred Heart. We kept it together, me and Howler: shopping for groceries and paying the gas bill and arranging the Ladies’ Home Journals in a fan shape on the coffee table.

We knew Mother had come around one evening when she fixed us chicken pot pies with extra peas and carrots. Howler set the table and tuned the radio to an all-music station. Mother’s chestnut brown hair was styled and she took an interest in our days at school.

“I have a chance to win an essay contest,” I told her, “We have to write a thousand words about our favorite period in history!”

“A thousand words, my, my,” Mother said. “What period did you choose?”

“My, my,” said Mother again. “How did I get such smart children? I’m just so lucky.”

I looked at Howler, who, miraculously had been paying attention all this time to my rants, who knew the topic of my yet-unwritten essay. He looked back at me mouthing, “There’s-no-such-thing-as-luck.”

I nodded, mouthing back, “I know.”

Gita Smith is a career journalist, whose work has appeared on The Sphere, Fictionaut, Not From Here Are You (The NOT), and her reporting on the South appears at LiketheDew.com, a news site. Luck was read by the author at HoW4.

at December 22, 2013
Email ThisBlogThis!Share to TwitterShare to FacebookShare to Pinterest