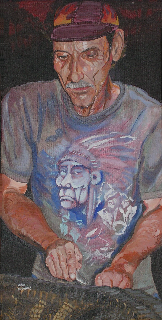 It had been five years since Katrina drove Auguste Babineaux from his bayou home near Lafitte, La., to neighboring Mississippi. His only possessions packed into his then-new, crew-cab Ford -- bought outright with cash earned from skinning alligators in September and redfish and speckled trout the other 11 months -- he drove north to Meridian. There, he toiled alongside teenagers 20 years his junior, bagging groceries and selling 99-cent tacos.

His coworkers’ smooth faces bore no resemblance to the topographical map encircling Auguste’s tired eyes. They spent their paychecks on the accoutrements of youth, while his were cashed, the $20 bills stashed in a metal box under his F-150’s front seat, awaiting the day he could go back home.
Late in December 2009, sick of living amongst people who couldn’t understand his Cajun dialect, he drove south to Biloxi, figuring he’d find a job easily with the hordes of contractors still rebuilding the coastal city. That didn’t work out so well. Cooyons couldn’t even pronounce his name; called him R.G. (instead of Auggie). And they were constantly poking fun at his white rubber boots.

Auguste wound up with the perfect job, though, as a security guard -- a role without a language barrier. At night, he slept in his truck, which he could park at the job site next to the Isle of Capri Casino on U.S. 90, the main drag. By day, he sat in a dingy guard shack barely 18 inches wider and longer than the fluorescent green Port-a-John 10 yards away.

The little shack was okay, though. It had an air conditioner about the size of small Igloo cooler, an even smaller television and a book shelf full of paperbacks by John Lee Burke. He liked to pretend he knew the protagonist, Dave Robicheaux, because he’d poached ducks on Barataria Bay with cousins sharing that surname. He’d also spent time in New Iberia, where Burke’s Robicheaux was a detective.

The guardhouse sat at the gated entrance -- think chain-link fencing, not lions atop pillars -- to a 5-acre cement slab abutting the Isle’s westernmost parking lot, used mainly by brown-skinned staff. It was difficult for hotel guests to decipher whether they were looking at a casino cemetery or nursery because the half-built or half-destroyed buildings’ exposed steel beams were rusty, as if they’d been squeezed out of the Gulf of Mexico’s colon.

Auguste hadn’t intended to stay in Biloxi. After barely a week on the job, he’d wanted badly to keep driving to Lafitte. He held no illusion that his camp, accessible only by boat, had survived Katrina, Rita or Ike. Far lesser storms were capable of burying the highest and most well built homes there, even those stilted ones on the mainland.

Yessir, he wanted to go back, perhaps return to his former life as a gator and fish skinner. Maybe find that spit of land and rebuild his cabin, one boatload at a time. But the BP oil rig blew that spring, and the leak had poisoned Louisiana’s marshes.

Fishermen were leaving. Shrimp nets were rotting. Restaurants were closing. TV people were moving in, and residents were again moving out.

But they’d stopped the gusher a month ago, and no more oil was coming out of the hole in the bottom of the sea. Fishing bans had been rescinded. Television news folk were no longer showing clips of pelicans covered in what looked like milk chocolate.

Just as Auguste stepped out of his air conditioned vault and stared at the water, a lone shrimp boat glided past, blue wings folded, heading out to the Gulf. He flipped his Marlboro into the stout breeze and decided right then it was time to go home. No more shitting inside a green ammonia bottle for him, mon cher. Besides, it was September, and Louisiana’s month-long gator season had opened.
© Mike Handley 2010
Mike Handley of Montgomery, Ala., is a career journalist and artist. His musings can be seen at handlets.blogspot.com, his artwork at www.mikehandleyart.com, and he's a frequent contributor at the 6S and ThinkingTen websites.
at October 13, 2010
Email ThisBlogThis!Share to TwitterShare to FacebookShare to Pinterest
Labels: fiction, mudjob